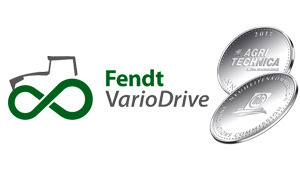 For the new Fendt 1000 Vario series, AGCO/Fendt set an exceptional goal: to develop a completely new standard tractor in a power range not yet occupied worldwide, 400-500 hp, that is compact, agile and versatile, and also extremely power and fuel-efficient.
To achieve this result, a completely new development along with an entirely new approach was required. The Fendt 1000 Vario is the first standard tractor worldwide with the comprehensive low engine speed design “Fendt iD” and the “Fendt VarioDrive” drive technology.

Back to Overviewpreviousnext
2015-09-10Press release

For the new Fendt 1000 Vario series, AGCO/Fendt set an exceptional goal: to develop a completely new standard tractor in a power range not yet occupied worldwide, 400-500 hp, that is compact, agile and versatile, and also extremely power and fuel-efficient.
To achieve this result, a completely new development along with an entirely new approach was required. The Fendt 1000 Vario is the first standard tractor worldwide with the comprehensive low engine speed design “Fendt iD” and the “Fendt VarioDrive” drive technology. 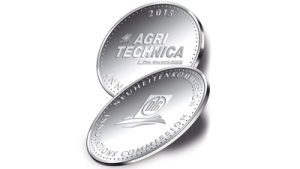 The new Fendt 1000 Vario, with 4 models (1038 Vario, 1042 Vario, 1046 Vario, 1050 Vario), is a compact standard high-horsepower tractor ranging from 380 - 500 hp (according to ECE R24) and is still versatile in use, for example for transport work (60 km/h) or heavy PTO work such as chopping wood. The low unladen weight of only 14 tonnes makes it predestined for work requiring low ground pressure, such as seeding. Thanks to its flexible ballasting concept, the vehicle can be ballasted according to need with up to 50 percent of its base weight. Thanks to its modular equipment options, with/without rear linkage or rear PTO, and the large number of hydraulic, hitch and linkage variants, it is compatible with all conventional implements, even those of previous high-horsepower tractors. The Fendt 1000 Vario was designed for the heaviest draft work, which was primarily reserved for articulated, tracked and system tractors up to now.

The Fendt 1000 Vario is the first standard high-horsepower tractor with the comprehensive low engine speed concept, Fendt iD. All vehicle components (engine, transmission, fan, hydraulics and other consumers) were perfectly coordinated with each other during development and designed according to the so-called “high torque – low engine speed” principle to minimise specific fuel consumption.

A new engine for a revolutionary concept

A new engine for a revolutionary concept

The high-horsepower tractor is equipped with a compact MAN six-cylinder engine with a 12.4 litre displacement and VTG turbocharger. The VTG turbocharger ensures dynamic performance and high torque in the lower speed range. These power reserves make a significant contribution to the realisation of the Fendt iD concept. The maximum torque of up to 2400 Nm lies at only 1100 rpm for the Fendt 1050 Vario. The rated engine speed lies at a low 1700 rpm. The main working range lies between 1150 - 1550 rpm. The1000 Vario reaches its maximum speed of 60 km/h at a fuel-saving 1450 rpm, 50 km/h at 1200 rpm, 40 km/h at an engine speed of only 950 rpm. The powerful, quiet engine is combined with a completely new stepless drive concept, the VarioDrive. The engine and transmission were already designed and optimised for each other during the development of the tractor 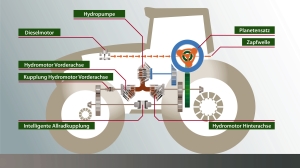 The drive unit on the VarioDrive works according to the principle of hydrostatic-mechanical power splitting. It has a hydraulic pump and two independent hydro motors, which supply the front and rear axles separately with drive torque. The hydro motor RA (rear axle) acts on the rear axle through hydrostatic-mechanical power splitting via planetary set and summation in the entire speed range. The hydro motor FA (front axle) is connected directly to the front axle and therefore mainly supplies high torque in the field. Through the intelligent overlay of the effective range from the drive to the front and rear axles, the maximum transmission output power is available over the entire speed range from 0 to 60 km/h without interruption of pulling power (range selector). Thanks to the intelligent transmission design, the hydro motor FA no longer transfers torque to the front axle above approx. 25 km/h; it is completely decoupled at higher speeds. There are no drag losses, which contributes significantly to an increase in efficiency when driving on the road.

The front and rear axles are driven independently, which opens completely new possibilities for the Fendt 1000 Vario: optimised traction, completely automated four-wheel drive and optimised manoeuvrability. Through the independent drive of the front axle, it was possible to realise an all-wheel drive without a fixed forward driving ratio for the front axle on the Fendt 1000 Vario. When negotiating curves, the active front wheel drive is able to pull the tractor into the curve actively – a so-called “pull-in turn” effect. This effect alone reduces the turning circle in the field by 10 percent. VarioDrive minimises the otherwise usual tyre wear on the front tyres caused by turning on the road.

As a rule, the torque is freely distributed independently on both axles and the transmission acts like an interaxle differential without a fixed ratio between the front and rear axle. If slip arises on the front or rear axle, the VarioDrive can move the torque from one axle to the other with the assistance of an intelligently controlled four-wheel clutch. This intelligent control of torque distribution ensures high efficiency, because the power is transferred optimally to the respective axle. 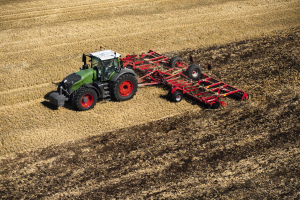 The cooling technology on the Fendt 1000 Vario was newly developed and consistently designed for low engine speeds and an extremely compact design: the Concentric Air System (CAS). At the heart of the CAS is a concentric high-capacity fan, which sits in front of the cooler units and presses cool air through the heat exchanger. Through its compact and very precise manufacture, it is extremely efficient. The clearance between the metal fan blades and the aluminium hood is less than 2 mm. Contrary to standard fans, the fan wheel in front of the cooler unit sucks in cold air. Since cold air has a higher air density, more air can be pressed through the heat exchanger and therefore a correspondingly greater amount of heat can be absorbed and dissipated. The dimensions of the Concentric Air System (CAS) can be kept extremely compact thanks to the guided air flow. This design, as well as the positioning of the CAS directly over the front axle, permits an excellent steering angle and thus the exceptional manoeuvrability of the Fendt 1000 Vario. The slight upward tilt of the fan arrangement and a round fan hood ensure a wide air stream and reduce the intake of harvesting residues. To maintain the cooling capacity at a constantly high level in a very dusty environment, it has an optional integral reversing function. This function can be selected with the Varioterminal. The CAS changes its direction of rotation and removes dust and harvest residues from the cooler grille.

The Concentric Air System is driven by its own hydraulic motor. That way the CAS is completely decoupled from the engine speed and can be actuated flexibly and according to need. The high efficiency of the need-based design of the overall cooling system reduces the required drive power by up to 70 percent (compared to a standard fan). The overall low noise level through Fendt iD, the minimised fan speeds as well as the small clearance on the hood, result in a very low noise level both inside and outside the cab and ensures pleasant working conditions, even when working at full load. 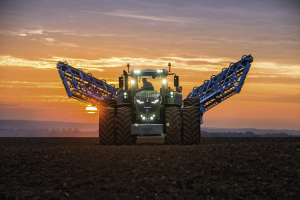