Hear for yourself what these IDEAL owners have to say about their experiences and how IDEAL has transformed their operations.

Waste Not, Want Not

A diverse family business, an emphasis on stewardship, and the right equipment are the formula for success at RAKR Farms.

Story and photos by Jamie Cole with myFarmLife.com

A modern farm simply can't afford waste. Whether we're talking money, inputs, labor, time... “waste not, want not” is the mantra the best farmers are chasing.

When we're talking to Richard Roach, who works with his father, Rick, and brother-in-law, Kyle Dyer, at RAKR Farms in Monticello, Indiana, the conversation centers on "not having a waste," he says. "It’s a different form of vertical integration with the end goal of adding value back to everything we’re doing."

While Richard doesn’t reveal acreage, he describes RAKR Farms as “a very average size family farm.” That seems apt, but in typical farmer fashion, a bit modest. They raise corn, soybeans, some wheat, and double crop soybeans behind the wheat. Richard says they’re also a “small speckle in the livestock space.” Rick partnered with two other local businessmen to purchase a hog operation in 1998, the year of a notorious price crash that afforded an opportunity for Roach and his partners to build upon. Today, that operation finishes about 10,000 hogs a year. In addition, the farm purchases about 250 stocker cattle a year for finishing; some of that herd will go into a small freezer meat business.

One can find examples of “vertical integration” and “added value” in that diverse business portfolio, but the real reason Richard uses those terms to describe how RAKR operates is a separate business that sits a few roads over from their six-generation farmstead: an anaerobic digester that does much more than “add value” to the family business. 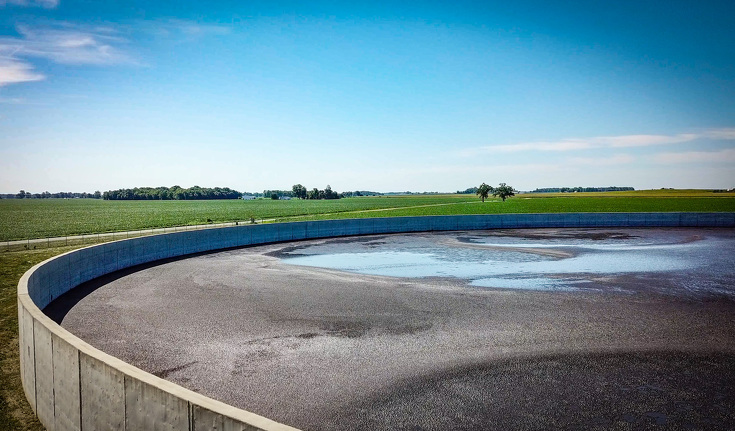 Making the Most of “Waste”

Richard says his family first learned about anaerobic digesters on a mission trip to Germany in 2006. “There was a foreign exchange student at our local high school whose family had a large dairy over there,” he says. “So when my family made that mission trip through our church, we made a point to visit that farm.”

On-farm digesters heat and agitate animal waste sludge in a large tank, where methane rises to the top and is captured and burned in a combustion engine and converted to electricity. Some farms use that electricity to be self-sustainable; some sell electricity back to the grid. While not all digesters are farm-based, the process does have a common connection to livestock agriculture: the conversion to methane replicates what happens inside a cow’s rumen.

While generating enough energy to power about 940 homes in the community, the digester also produces an effluent byproduct that is “a major fertilizer (source) for our crops,” Richard says. The fertilizer product, registered as “Green Phoenix,” can even be purchased; the digester produces 35,000 gallons of it every day. “We just thought, ‘That model really works,’” he says. “It adds value to both our livestock and our cropping side.”

Other farms have reached the same conclusion. In 2019, there were about 250 farm-based anaerobic digesters in the U.S., and another 60 or so in Canada; not quite enough to be common, but also not necessarily unique.

What’s unique about this digester is that it takes waste repurposing beyond the farm. Besides being a stand-alone facility—again, it’s separate from the farm proper—the digester also accepts food waste, an added value not just for RAKR Farms but for the entire region. “We get spoiled goods,” he says. “We’ve had beer, Dr. Pepper, cheese, milk… we once got a wrecked semi where the milk tanker sat there and the milk got warm.” While there is a strict testing procedure—“we have to get each class of product approved,” Richard says—the facility can handle fats, oils, sugars, proteins… essentially, anything that cow’s stomach can.

“Those products were either going to a landfill or being directly land-applied,” says Richard. “So it looks good for those businesses that this product is going to a renewable facility. It’s economical for them. And it’s another revenue stream for us,” he says.

About 5,000 gallons of the material processed daily is manure from the RAKR livestock operations; another 30,000 gallons is the food waste. Many regional partners bring in one or two semi loads a day of some kind of food waste; the trucks roll by a modest sign at the roadside marked with the business name: appropriately, “Waste No Energy, LLC.” 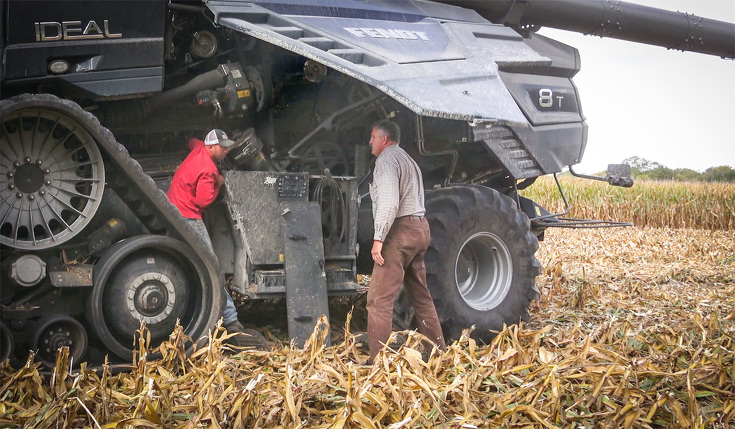 Rick Roach is quick to point out that operations of this scale and diversity are a team effort. “RAKR” is short for four surnames of partners in the businesses, past and present. The first “R” is Roach. The “A” is for Ervon Arthur, a former partner, who Rick describes as a “gifted operator” and a “talented wrench” who can find problems with equipment when others can’t. Even though he’s technically retired, he’s often found in the combine cab on the farm at harvest time. While the “K” in RAKR, Dave Kilmer, isn’t involved in the day-to-day operations now, he was part of the team that purchased the hog operation in 1998. The final “R” represents Doug Raderstorf, who is the president and manager of Waste No Energy LLC and CFO for RAKR Farms.

Together, and with family members Richard and Kyle, they’ve navigated the challenges that any family farm would face, along with those presented by new ideas like the digester project. For instance, while there are on-farm digesters and stand-alone digesters, there aren’t many that process both manures and food waste. “Nobody knew how to regulate us,” Richard says. Even the general contractors who built the facility, a company called U.S. Biogas (Now called Dynamic Group), is still consulting with Waste No Energy on getting the most out of the facility.

“We’re still learning with all of them,” says Richard. “And I’m just really proud of what we’ve done as a team. We’re very excited about our process and what it can do for our community and our world, continuing to find alternative fuel sources.”

Eliminating waste goes beyond product at RAKR Farms. Richard says that recent innovation in equipment has helped the operation become more efficient with time, fuel and labor at harvest.

“Obviously, a combine is a huge capital investment, and a crucial and important tool,” he says. The RAKR Farms approach to managing harvest was one of risk management: “We always historically had one red combine and one green combine, and we felt that was a way to kinda spread the risk a little bit and capture the benefits of both machines.” Besides being a large financial investment, it’s also a drain on time, with maintaining two machines with different parts, different headers, etc., and labor, since operation is different. “We have to do more with less,” Richard says, so they looked for a machine that could help them change their model. 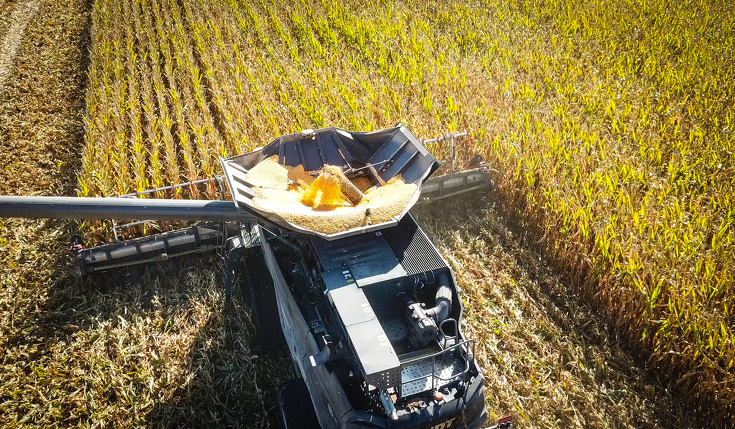 That’s what led them to the Fendt IDEAL combine.

“There were existing machines that had the throughput capacity that we were looking for, but they did not have the grain handling capacity,” he says. “There were machines that have the grain handling capacity, but did not have the throughput capacity.” In 2016, RAKR Farms also transitioned to controlled-traffic farming to help reduce compaction—every piece of equipment that passes through their fields is on the same traffic lanes, and they wanted everything on tracks, as well.

“That’s what we liked about the Fendt,” he says. “On paper, it could have the capacity that we needed for the throughput. It had the grain tank size, the unload auger speed… to push everything through one machine and maximize the efficiencies in harvest and maximize our grain handling infrastructure.”

“On paper” is an important distinction. The IDEAL combine is what engineers refer to as a “clean-sheet” design, a fresh approach that pools years of interviews with combine operators around the world, lab and field tests, and engineering expertise into what AGCO describes as “not just a new machine, but a harvesting strategy.”

“So we factored all facets into the analysis of the purchase of that machine,” says Richard, including fuel costs, as well. “We looked at fuel savings from (the aspect of) total fuel used because we felt like we’d be able to complete the same number of acres in fewer hours,” he says. “We were pretty close in our modeling and they came through as advertised.”

A clean-sheet design can also mean growing pains, and Richard says that was a risk they were willing to take for the sake of efficiency. Plus, he says, “with the Gold Star program, which includes zero maintenance expenses for the first three years, you start to level that playing field pretty quickly,” he says. “That's a big deal, especially when you're trying to run one machine, if your machine goes down, you go from 100% productivity to 0% productivity.”

Even a zero-maintenance program needs local execution, and Richard is quick to credit Plevna Implement Company and their Kokomo, Indiana, location. “The Plevna team really proved themselves to us,” he says, not just in negotiating the purchase of the machine, but in their service standard.

He remembers needing a part late one night as soybean harvest was wrapping up. “We knew that we had a rain coming. It was 10 o'clock. We needed a part. We flew over to Kokomo, and one of their service technicians met us there... handed me the part. He had taken it off a machine that they had sitting there. I came back, threw it back on and we kept cutting until 3:30 in the morning.

“And we finished the following day just before the rain,” he says. “There was not another good bean-cutting day that fall, so had we not gotten done, we would’ve been drying soybeans. And that's essentially a cost that you could add back to your combine had we not received the timely service.”

Richard and the RAKR team also know AGCO wants the machine to be successful. “They are taking our input very seriously,” he says. “Someone on the operational level, like us here, to be able to have access to some of the top guys in AGCO who really have an open ear ... that speaks volumes.”