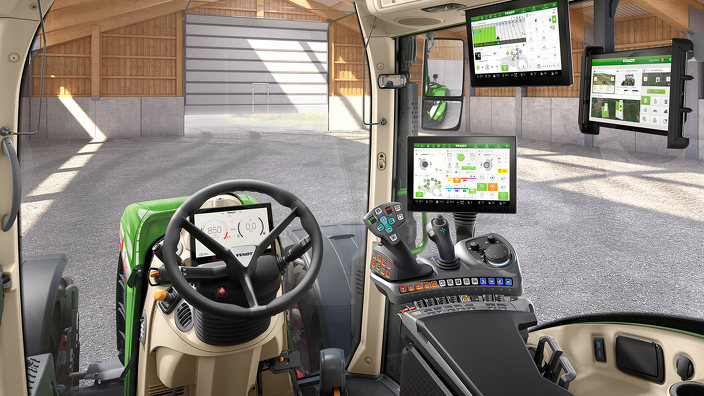 Back to Overviewpreviousnext
2019-07-02Press release

The Fendt 700 Vario is the first tractor to connect the on-board world to the off-board world. FendtONE is the new end-to-end Fendt platform that works both in the tractor cab and in the office, or wherever you are on your mobile device. With this ubiquitous approach from FendtONE, Fendt is the first manufacturer to combine the familiar terminal-based operation of the tractor with a platform for planning or control tasks that are conventionally done in the office. The interface on the tractor terminal and online are uniform and consistent in their appearance, so users can easily find their way around.

With FendtONE, users can plan their orders and field data on a computer or smart device wherever they are, then transfer them to the tractor on the mobile network.

The FendtONE system offers Smart Farming applications for Profi+ – such as tracking capabilities, Fendt Task Manager for efficient task management, Fendt Guide Sync for field data management and reports on tractor use. On the FendtONE platform, every customer can find their specific applications and gradually expand their functionalities. It helps the user optimise work processes, get the most out of their machines and comply with legal guidelines on documentation. It is very much future-ready. 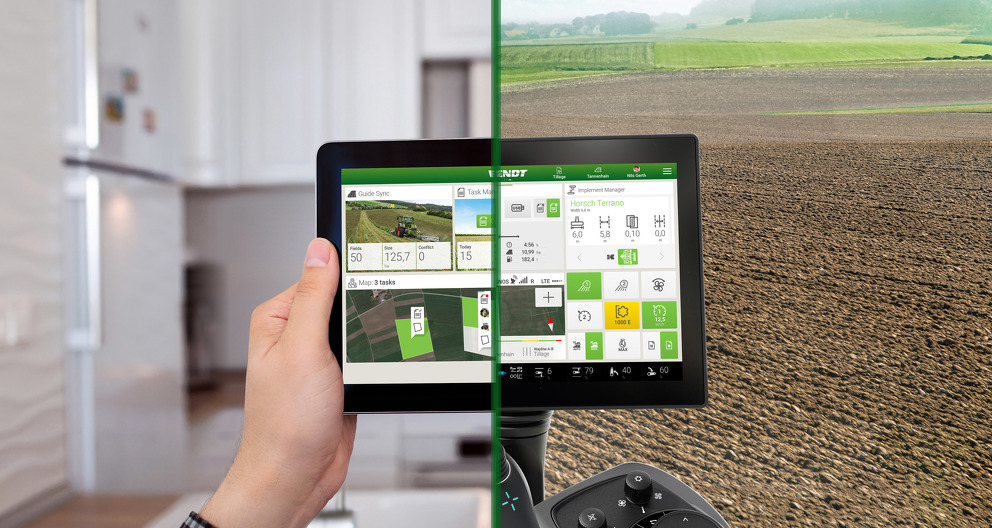 Work tasks, like using multi-agent crop protection applications on one field, can be created easily and in just a few steps with the Fendt Task Manager. First select the job then add the machine, attachement, employee and field, then enter the plant protection products. Once the job is created, you can save it for later use. The subsequent report significantly reduces the workload required to comply with legal documentation requirements.

Fendt Guide Sync syncs all field boundaries, waylines and obstacles across all linked machines. The different datasets of the machines are organised once on a mobile device then sent straight to all the farm's machines. This data helps you maximise yield from the field and work them evenly with different machines, using the same boundaries and waylines. Synchronisation within the fleet reduces fuel consumption on all your machines, as you have the whole fleet running in a coordinated way and fields are worked at permanently higher efficiency rates. Fendt Guide Sync will be available through a software update from November 2020.

FendtONE also integrates the agrirouter™ data exchange platform. With this, the farmer can choose the operating system and machine, with open interfaces to exchange data between the different systems and between farmers and contractors. The agrirouter™ does not store data and farmers themselves choose which data is shared with other systems, meaning Fendt farms always retain full control over their data. The entire process meets the strict regulations of the European General Data Protection Regulation (GDPR). 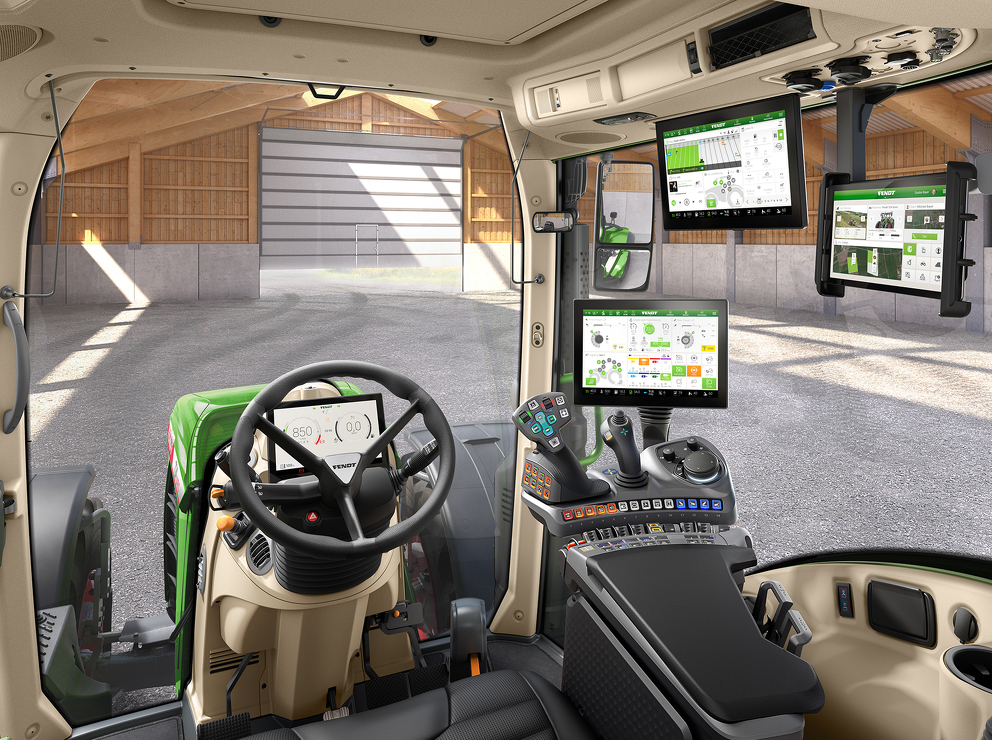 More ergonomic in its use

When we developed the new operating philosophy on the Fendt 700 Vario, we focused on intuitive and individual operation as well as ergonomics. The new multifunction joystick, for example, has been equipped with added functions and the crossgate lever has been ergonomically optimised, making it easier to operate different attachments. You can assign the use of the buttons in the Individual Operation Manager (IOM) on the terminal. A clever colour concept helps the driver to quickly find their way around and avoid operator errors.

All functions are divided into different groups with an assigned colour. The driver immediately sees whether buttons have been re-allocated by the colour concept. As well as the well-known crossgate lever, the new 3L joystick with up to 3 operating levels and up to 27 functions is also available as an option. With the 3L joystick, you can control the front loader models Fendt Cargo and Fendt CargoProfi, including a weighing function. You can now use the 3rd valve together with the 3L joystick and the Fendt front loaders to run 3 functions at the same time; use round baler forks to lift the front loader, retract the forks and close the clamp at the same time, for example.

You can also control an ISOBUS implement and tractor functions with the 3L joystick. If your working day includes frequent changes of direction, the added reverse drive button on the 3L joystick makes your work quicker and fatigue-free. 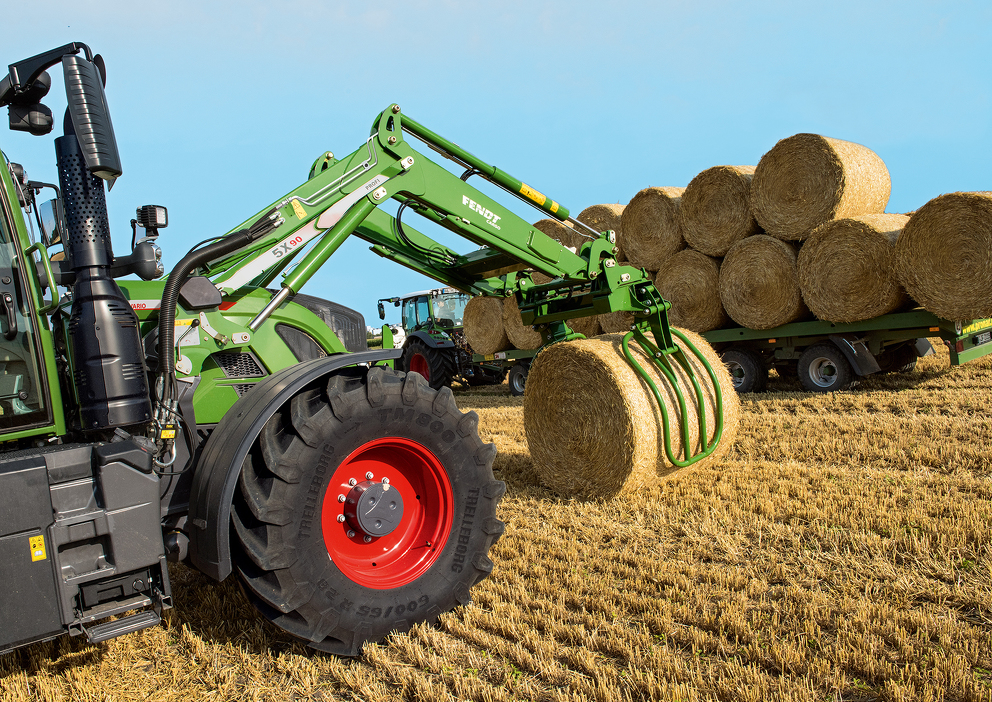 The ever-increasing number of terminal applications means you need more display room in the tractor. Together with the new operating philosophy, the new Fendt 700 Vario features a combination of 3 display options with a central computer. These consist of a new 10" digital steering column display (dashboard), a 12" terminal on the armrest and an optional 12" terminal in the sunroof. Up to 6 freely configurable display fields can be shown on the 12" terminals, while the dashboard terminal displays Fendt Guide features and all the machine info you need for road travel in accordance with traffic regulations. The dashboard display is easily controlled with a pushdial on the armrest.

The 12" terminals can also be operated via touch, for easier control. The 12" roof terminal can be slotted half-way into the sunroof for a better overview when out on the road. Applications such as air conditioning and infotainment will continue to be displayed on the lower, visible half of the terminal.

With the 3 terminals together, drivers can customise the display areas and get a better overview of the variety of functions.

Fendt offers an optional infotainment package and a 4.1 sound system including subwoofers. The infotainment package includes a hands-free speaking system with 8 microphones installed in the sunroof. The special arrangement of the microphones provides the best sound quality from any work position. You can control the system on the terminal, for ease of use. You can receive both AM/FM and digital channels, and play external audio sources via Bluetooth, USB or AUX. Two antennas are set at 90° into the cab windows, providing smooth reception.

The ISOBUS standard for attachments is still the most popular choice and to be ready for the future, the Fendt 700 Vario now has an ISOBUS connector at the front. This means you can drive front and rear attachments consistently with ISOBUS, which is easier to use and means you can operate the attachments centrally on the armrest.

FendtONE will initially be rolled out in Germany, France and United Kingdom before being expanded to other markets.