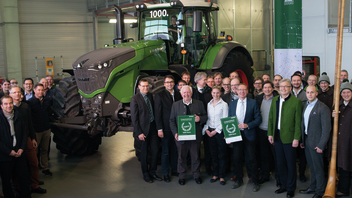 After the launch of the first major serial run of its new flagship series, Fendt 1000 Vario, in Autumn 2016, Fendt can now announce the first production milestone for the world's most powerful standard tractor. On Wednesday, 20 December 2017, much earlier than expected, the 1000th Fendt 1000 Vario rolled off the production line.

Back to Overviewpreviousnext
2017-12-21Press release

After the launch of the first major serial run of its new flagship series, Fendt 1000 Vario, in Autumn 2016, Fendt can now announce the first production milestone for the world's most powerful standard tractor. On Wednesday, 20 December 2017, much earlier than expected, the 1000th Fendt 1000 Vario rolled off the production line.

The 380 hp Fendt 1038 Vario was ordered through the highly successful Canadian Fendt dealer, Maple Lane Farm Service Inc., Mount Forest, Ontario, and will be delivered to Jeremy and Herman Terpstra at their dairy farm, Terpstra Farms Ltd, in Brussels, Ontario, Canada. The special-milestone tractor is set to sail to Canada in the next few days, and will be in the hands of the Terpstra family in late February 2018. "We are delighted with the excellent worldwide acceptance of our new 1000 Vario high-power tractor models. At up to 517 hp, they have shaped a new market and are now delivered in a total of 35 countries throughout Europe, North and South America, Africa, Australia and Asia," says Peter-Josef Paffen, Chairman of the AGCO/Fendt Management Board. 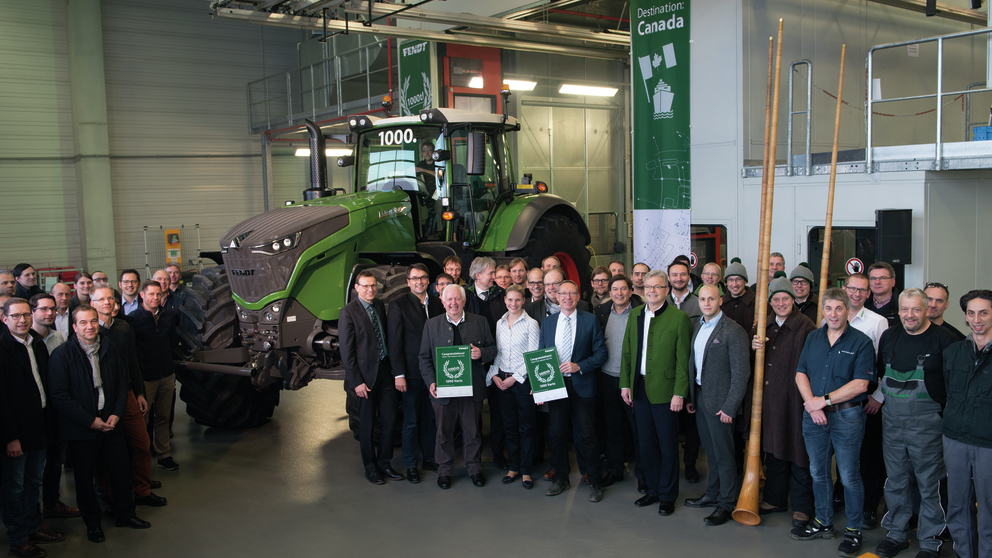 Production milestone at Fendt: on Wednesday, 20 December 2017, the 1000th Fendt 1000 Vario rolled off the production line. The Fendt 1038 Vario will be used on a large dairy farm in Ontario, Canada.

The Fendt 1000 Vario was a blank-canvas innovation that filled the previous gap in the 380-517 hp power range for standard tractors. This was the first time a model has been designed to the requirements of professionals in large-scale farming from around the world, and is seen as Fendt's first global tractor model.

Its outstanding features include a comprehensive and fuel-saving low-rpm concept "Fendt ID", a new generation of Fendt Drive technology "Fendt VarioDrive", up to 60 km/h transport speed and a smart ballast design including tyre control pressure system. 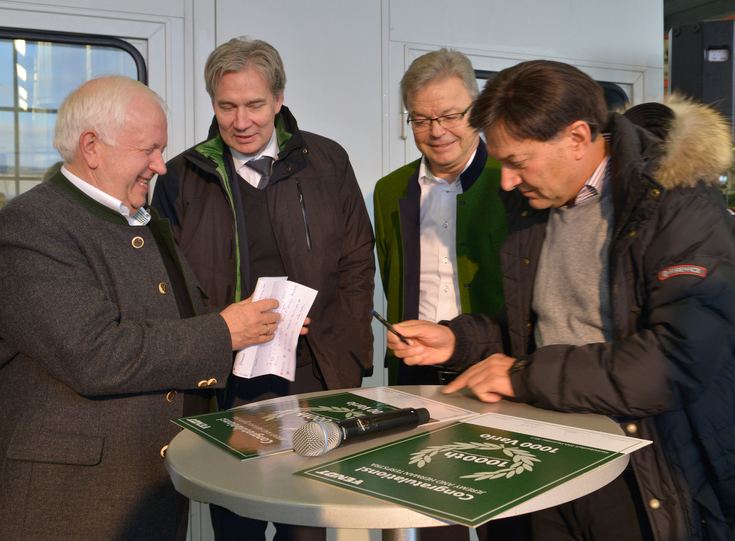 Fendt's Managing Directors sign the certificate of congratulations marking the 1000th Fendt 1000 Vario. Left to right: Peter-Josef Paffen, Chairman of the Board, Ekkehart Gläser, Director of Production, Dr. Heribert Reiter, Director of Research & Development and Purchasing, and Michael Gschwender, Director of Finance and IT.

Fendt premièred the launch in July 2014, with a preview in front of the international press at the world-famous Neuschwanstein Castle at Füssen in Bavaria. The first photos and details of the 500 hp Fendt 1050 Vario standing in front of Neuschwanstein Castle grabbed worldwide attention. A year later, production started on the first pilot series followed by a full presentation before and during the world's leading international trade fair, Agritechnica 2015. In 2016, interested farmers were able to test the Fendt 1000 Vario live as it toured Europe and North America. From September 2016, the first larger quantities of the 1000 series were produced, and were soon delivered to its first customers. The feedback from customers after first use was extremely positive. 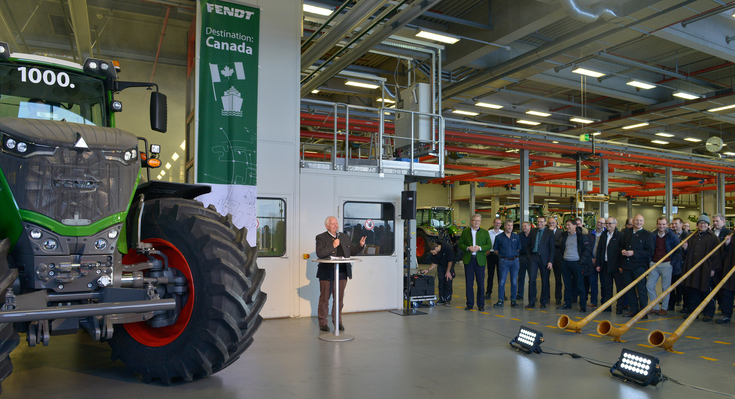 Much earlier than expected, the 1000th Fendt 1000 Vario rolled off the production line on Wednesday, 20 December 2017. Peter-Josef Paffen, Chairman of the Board (left) celebrates the production milestone with colleagues and employees from every area of the business.

16 international awards for the Fendt 1000 Vario

The Fendt 1000 series received a total of 16 international awards in 6 different countries for its sophisticated overall concept, special technical detailed innovations and for its new design. Among them the "Tractor of the Year 2016", "Machine of the Year 2016" in the XXL Tractor category and the coveted "Public Award", gold medals and much more.

The 1000-series models have gone down a storm in the US market and Canada. 310 Yellow units have now been delivered through the Caterpillar dealer network under the Challenger AGCO brand and almost 200 units via the Fendt dealer network. The first demonstrations at major customers in South America are also promising.

The other half of the 1000 delivered 1000-series models went to customers in Europe, Africa, Australia/New Zealand and Asia. Priority countries ordering higher quantities are Germany, France, Great Britain, Italy, Russia and Denmark.

Now also confirmed by an independent expert! The German Agricultural Company, DLG, and the editorial staff of profi magazine tested two Fendt 1000-series models and determined the fuel consumption on the new DLG PowerMix roller dynamometer. The result: The Fendt 1042 Vario consumes an average total of 236 g/kWh of diesel across the 12 different PowerMix cycles. The Fendt 1046 Vario uses another two grams less than that, at 234 g/kWh. That sets two new world records in fuel consumption. The low-rpm concept and a number of new technical detailed solutions offer decisive advantages in terms of fuel consumption and overall economy.