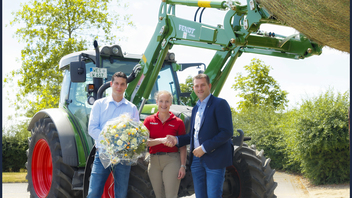 On 26 June, a brand-new Fendt 208 Vario was delivered to the Training and Show Stable in Rheinberg/Niederrhein. The Fendt tractor with front loader will be used in the yard and on grassland in the equestrian centre run by dressage rider Isabell Werth.

On 26 June, a brand-new Fendt 208 Vario was delivered to the Training and Show Stable in Rheinberg/Niederrhein. The Fendt tractor with front loader will be used in the yard and on grassland in the equestrian centre run by dressage rider Isabell Werth. 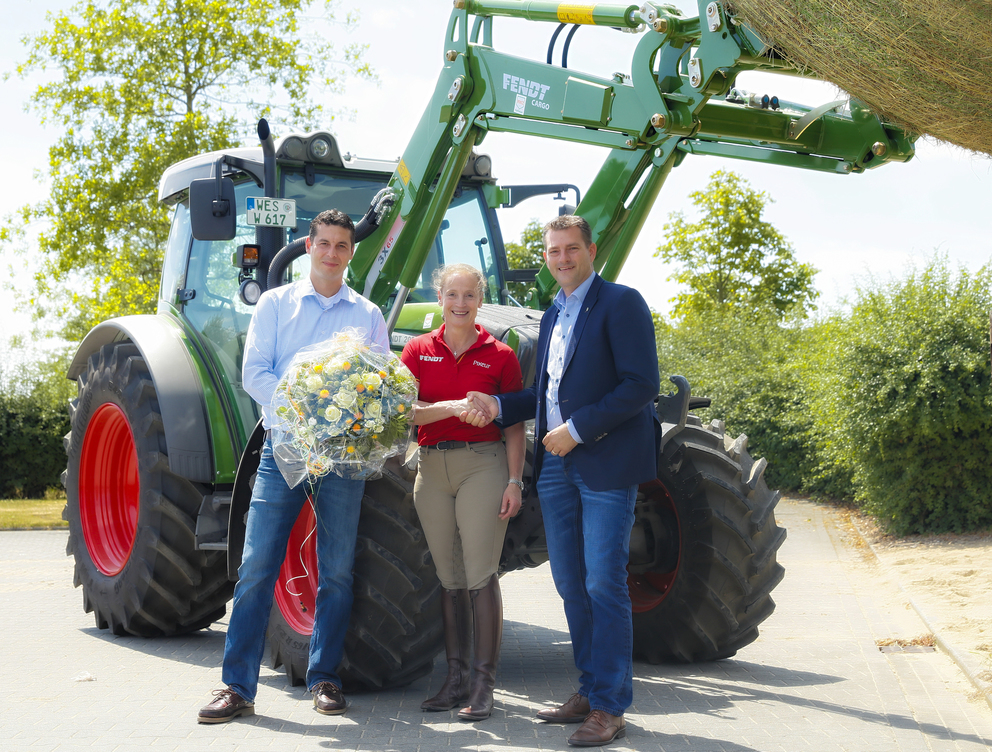 Handover of the tractor in Rheinberg: Isabell Werth with Markus Lange from the RWZ Agricultural Equipment Centre in Geldern (left) and Frank von Ameln, Managing Director of the Rommerskirchen agricultural equipment group (right).

“I grew up on this farm, and took it over from my parents in 2003”, says Isabell Werth about the business which also includes 23 ha of farmland. “Previously, the farm was a mixture of cattle and arable crops. 25 years ago, we gradually switched over to keeping horses, initially breeding them, but since 2003 we’ve also been running a training and show stable.”

The hay for around 100 horses stabled at the centre is produced in the farm’s own fields by the new Fendt 200 Vario with forage harvester. “With the Fendt 200 Vario, we have configured a tractor which is even a match for the Werth yard with its 80 HP”, explains Markus Lange of the RWZ Agrartechnik Zentrum in Geldern. “The highly-manoeuvrable and compact tractor fits into the stalls, and can be used in a variety of ways in the riding centre, anything from front loading to maintenance work.”

The new tractor will also be used together with a course planner to prepare arenas for some 45 competition horses, among them many German champions, European and World champions, as well as Olympic medallists. Isabell Werth laid the foundation of her success at a relatively early age. She started out as a showjumper and three-day eventer, but switched to dressage in 1987. Since the 2016 Summer Olympics in Rio de Janeiro, it’s official: Isabell Werth is the world’s most successful dressage rider. 10 Olympic medals, 7 World titles and 13 European Championship medals, and not least, 14 times German champion – that’s the unrivalled record of the Rheinberger.